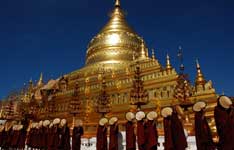 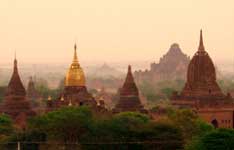 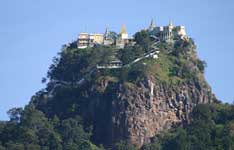 Bagan, is an ancient city located on the eastern bank of Ayeyerwaddy River, 293 kilometres south of Mandalay. There are more than 2200 religious monuments in different sizes and shapes built in 11 and 13 centuries AD in an area of 42 square miles.

According to the Burmese chronicles, Bagan was founded in the second century AD, and fortified in 849 AD by King Pyinbya, 34th successor of the founder of early Bagan. When King Anawrahta ascended to the throne in 1044, Bagan rose to its golden era, it became the capital as well as the political, economic and cultural centre of Bagan Empire. King Anawrahta founded the First Myanmar Empire, carried out religious reforms by establishing pure Theravada Buddhism and made Myanmar historic period came into near-perfect light. However Bagan empire fell in 13th Century AD due to Mongol invasion. During its height between 11 and 13 centuries AD, over 10,00 Buddhist temples, pagodas and monasteries were constructed in Bagan plains, of which over 2200 temples and pagoda still remain and survived to the present day.

Bagan today is the richest archaeological site in South East Asia and seen by many as equal in attraction to Angkor Wat in Cambodia. Thecradle of Myanamar culture with its unique mystical landscape across the Bagan plain casts a spell over its visitor with distinct memories of their visit to this land.

Salay (sometime described as “Sa-le”) is a small ancient city and a colourful religious centre situated about 120 kilometres south of Bagan, on the eastern bank of Ayeyarwaddy River. Salay is the birth place of famous Myanmar poet and writer U Ponnya. The highlight of Salay includes “Yoke-Sone-Kyaung” Monastery, Shinbin Maha Laba man Pagoda and colonial buildings. Yoke-Sone Monastery was built in 1882, it has very beautiful artistic wood carvings and sculpture depicting Jakata tales, ancient Buddha images, untensils of 19th Centuary Yadanabon period and the museum of 19th century Myanmar famous writer/ poet U Pone Nya.
Shinbin Maha Laba Man Pagoda is the largest lacquer Buddha Image in Myanmar, said to date back to the 13th Century.

Mount Popa (1,518 metres above sea level) is located 60 km south east of Bagan. It is the oasis of the arid zone stand alone in the Mount Popa National Park in Myanmar. The main mountain is the extinct volcano and looks like an ordinary volcano with a conical silhouette and concave slopes steepest near the carter rim. Taunkalat (table mountain) formed after the volcano eruption some 320,000 years ago. There are winding stairways to reach to the summit of Mount Popa for a breath taking panoramic view of the surrounding countryside. Tame monkeys can accompany the visitor all the way up. There are many springs on this mountain from where water constantly comes out. The soil is naturally fertile so that medicinal plants and trees such as banana, jackfruit, papaya, coffee, plums, grape and vegetables can be grown on the slopes and at the foot of Mount Popa.
Mount Popa is also locally famous as home for “Nats” (spirits). Those who believe in “Nat” come and pray to for their wellbeing and perform “Pwe” dedicated to 37 “Nats”. The symbol of mountain is champak flower.
Other places of interests nearby includes sandal wood plantation, education centre for the flora and fauna of Mount Popa.

Pakkoku situated on the wesern bank of Ayeyerwaddy River, north wester of Bagan across the River. Pakhangyi with Pakhagyi archaeological site is the ancient town of Pakkoku, situated 20 km north east of Pakkoku. One can still see the remnants of old city wall, well restored Pakhangyi monastery wooden monastery with 254 pillars, museum and other ancient monasteries. Pakkoku is also famous for its agricultural produce, tobacco, cotton and textiles such as longyis and blankets (locally know as Ah-Nyar-Saung). 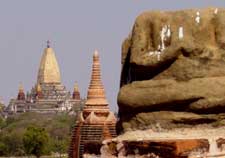 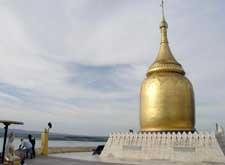 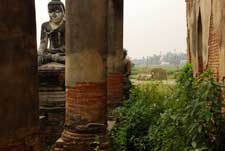 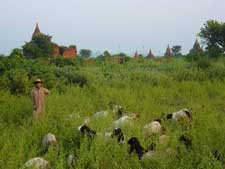 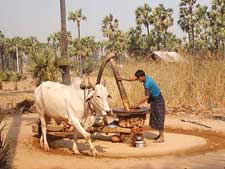 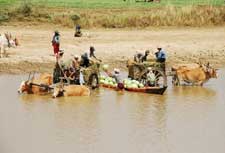 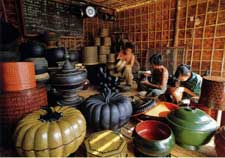