Text and Pictures by Christian Hainzl 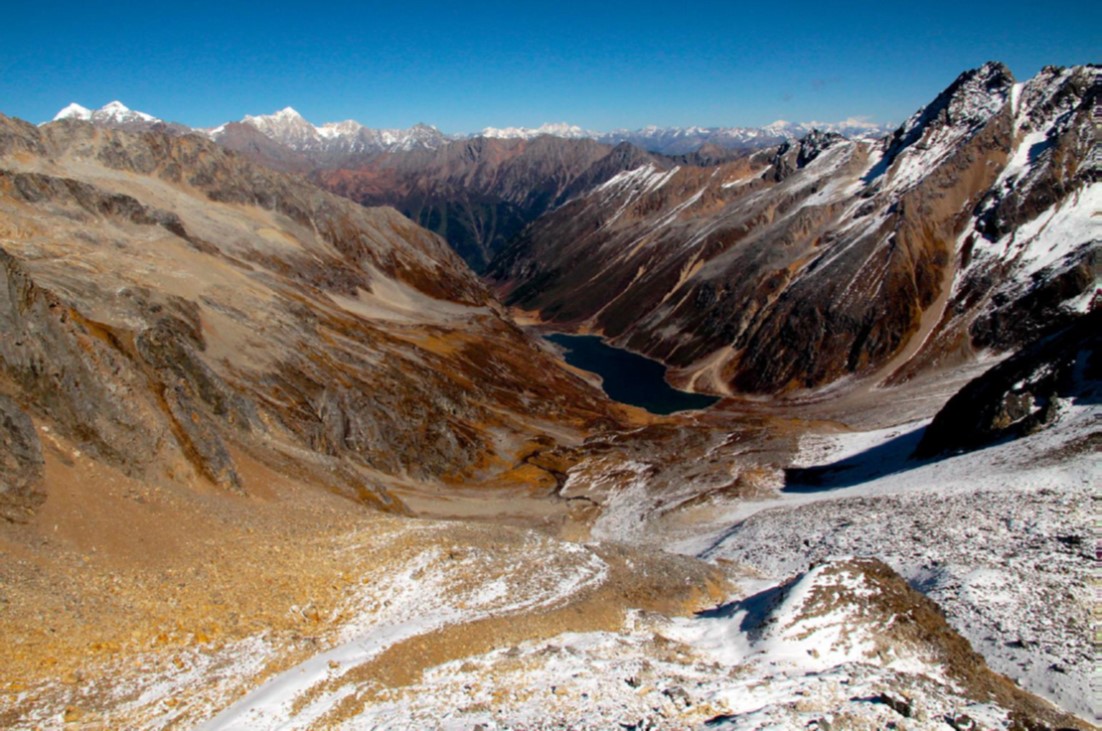 The view was stunning: From the top of the peak at some 5150m (16895ft) above sea level there was a plethora of dozens of snowcapped peaks in all directions, glazing in the bright sunlight and against a deep blue sky. Looking towards North, there were the peaks of Hkakabo Razi, and Gamlang Razi, South East Asia’s highest mountains, only a few kilometers air distance away and some 700m (2300ft) higher than our vantage point. Below us was a relatively broad high valley at estimated 4300m (14110ft) with a kilometer-long dark blue lake in the center. We could see a tiny snow trail leading from the pass below towards its shores and then going further on to Tibet, China. As we had heard there was a trading place 1-2 walking days away in the very high mountains. There, valuable medical roots and herbs of the Himalayas were exchanged for salt and tea and much desired consumer products. The TVs and pocket radios we had seen with the Tibetan villagers on the way had travelled from there.

The day before, we had arrived at our base camp at about (4500m/14770ft). It had taken us some 145km (90mi.) of arduous jungle walk to get here, following the course of the rivers, on rugged, small trails, crossing over hundreds of smaller and larger water streams and dozens of slippery, shaky bamboo bridges, some of them up to 80m (260ft) long and high above the green whitish rivers.

13 days ago our local guide had welcomed us at Putao airport in Northern Kachin State. From there we continued with a gang of young motorcycles riders who took pride in mastering the muddy trails and river crossings with the highest possible speed. They dropped us off one and a half days later at the small village of Gawle, our shoulders and butts aching from keeping the balance. Next day we crossed over a ridge (1790m/5875f) to the village of Pangnamdim (1025m/ 3360ft) at the Tamai river. The first day we were walking in pouring rain which made our shoes in the evening feel like rubber boots filled with water.

Our core group was composed of four. Two friends, Austrians, with a passion for the Himalayas, then U Ah Yin, a local Rawang, born in the area, who being in his early 70s amazed us with his walking speed, and a cook and his helper. As everything we would need for food, trekking and climbing in the next 3 weeks had to be carried with us having some local porters was essential. With the winter paddy fields ripe for harvest and the Myanmar National Elections only a few days ahead, to find the 8-10 porters we needed, turned out to be a problem that kept bothering us throughout half of the trek. 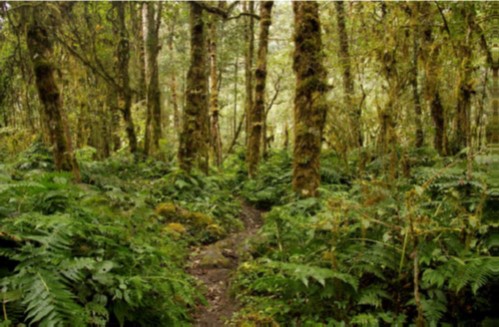 The footpath we followed from Pangnamdim is a small rugged trail notched to the Tamai river slopes, with the slippery path running at times close to the river but mostly high above, where slipping and falling would be extremely dangerous.

The thick jungle with its hundreds of greens is most of what you get to see for the first week. The walking, the sweating and the minding of your steps, embedded in the daily routine of packing and unpacking, stopping for the simple rice based breakfast, dinners and lunches, become one’s simple and principal task, which challenges the mind to just be in the moment.

After eight days on the road and on Myanmar’s National Election Day we stopped at the village of Gawai, being one of the most remote polling stations in the country and catering to 28 eligible voters. The voting station was properly set up in the rough building of the village school, where we also stayed for the night. In the evening we were sitting jam packed in the house of the village head, watching the election reports from all over the country on the only village television. Feeling the excitement in the room and being jointly moved to see the massive voter turn out that made this a historical election.

The next day we reached Dazungdam village, still at only 1700m (5580ft) altitude, from where travelers to the Hkakabo Razi basecamp need to follow the Adung river to the North-East while we were turned to North-West towards the Seinkhu valley. Here for the first time we managed to get the porter problem solved and had a mixed group of eight, cheerful boys and girls in their early 20s with us. Dressed in a fashionable way with up to date T-shirts, fancy baseball caps and listening to loud music from phones or small radio players. Over time our admiration for their speed and sure-footedness on the slippery path, being outfitted with the most basic equipment, and for their easy going and fun laughing attitude was constantly growing. We got used to fall asleep and wake up to their giggling and laughter, which only got tempered when temperatures dropped far below zero. The cook and his helper were at the core of the group. And our stamina heavily profited from their amazing skills to set up a kitchen wherever and with a single wok pan to speedily feed 13-15 people morning, lunch and evening. 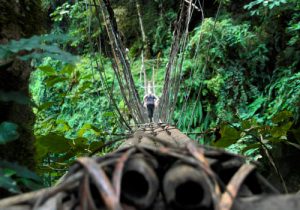 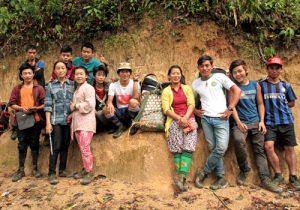 In the evenings, sitting at the open fire, we spoke about the mountains, the people, the opportunities and concerns. “The worst would be if they build a road. Then all what you can see will be gone in few years. On the other side of the border already now nothing is left”, U Ah Yin stated his worst fears. “We need to teach our people how to preserve.”

Indeed preservation seems to be an issue. Apart from one mongoose which accidentally crossed our trail we did not see any wild animals. Being in the Hkakabo Razi National Park, which is considered a global biodiversity hotspot, we had hoped to see some larger animals as deer or takin, or at least some bigger birds. But even smaller birds were rare and the only animals we indeed made contact with were the leeches, sandflies and a few gigantic ticks. In a way this was not surprising as basically every porter or villager we met was carrying a slingshot or a crossbow used with poisoned arrows. Neither did we see a single snake the whole three weeks while without doubt these jungles are snake paradise. Acclaimed American herpetologist Joe Slowinski died in 2001 in the remote village of Rat Baw from the bite of the deadly multi banded krait, as movingly described in the “The Snake-charmer”.

Dazungdam marked the last village mainly inhabited by the Rawang, an ethnic Kachin tribe of some 60-90000 people in total. The path then turned steep and much rougher than before, marking a different and more alpine zone. Over the next two days we climbed up every day for at least 1000m (3300ft). And finally, after 11 days of walking, we entered the world of the Myanmar Himalayas and with it the little Tibet of Myanmar.

Mading (2550m/ 8370ft) was the first Tibetan village which we reached after balancing over three lofty bamboo bridges and a number of climbs along ladders and ropes. The place reminded of villages and scenery I had seen in Bhutan and Tibet with the colorful prayer flags welcoming you on top of the hills and around the houses. The Tibetan homes, having to resist the rough high altitude climate, differ from the Bamboo build Rawang houses we had seen on the path before by use of massive wooden stems for the walls and roofs covered with large, wooden shingles. Villages looked simple but well in shape with the houses surrounded by corn and barley fields and draft cattle plowing the soils. We stopped in the house of the local lama and over butter tea, hot milk and roasted corn inquired about how best to reach Malikhu Razi (4907m/16100ft) which was the mountain we had planned to climb. 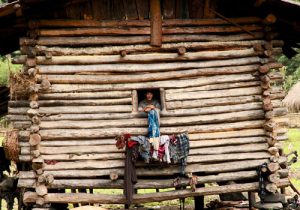 What we learned was heartening and discouraging at the same time: The villagers consider Malikhu Razi, which is the source of the Malikha River, a sacred mountain. A holy peak which is believed had been placed by Lord Buddha himself, a place nobody is allowed to go, and if comes too close, animal or human, will fall sick or die. At the same time, a place of refuge, where they would seek shelter with the community in times of danger and when the last days come. It was uplifting to discover that there is a kind of Mount Kailash of Myanmar. Thus we had to scout for other peaks further up the valley.

Two days later we set up a base camp (4500m/14770ft) at a soft plateau above the Seinkhu valley from where we continued for a few hours of slow walking in the high altitude to reach Lama La, the high pass at about 5050m (16570ft). There under the flittering Tibetan prayer flags and overseeing the whole area with dozens of peaks on the Indian, Myanmar and Chinese sides of the border, we realized that most of the unnamed peaks we had been eying on through Google Earth were out of reach for us. To scout them properly and to decide on a safe access route would have taken us at least another two or three days, which we could not afford against our planned schedule. Thus we opted the next day for a smaller peak adjacent to the pass with an ascent over a rocky stone field and a final, steep ridge climb. With a sense of gratitude we build the first stone-man on the summit, placed a flag under it with date and names, and claiming the peak half-seriously for us by naming it “Austriaco Razi”.

From here the walk back to civilization started. In the absence of a round-trip option on the same trail for another long 145km (90mi.). Soon swallowed again by the tropical forest and bound to the daily repeating, up and down rhythm of the river trail the walking back was etiolating at times, while inside we felt happy and fortunate. How many places on earth are still there so remote to reach, so unspoiled and, some 66 years after Frank Kingdom-Ward’s “Burma’s Icy Mountains” first expedition report, still so unexplored? Lucky us to experience its isolation, distinctiveness and beauty. 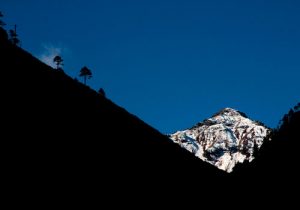 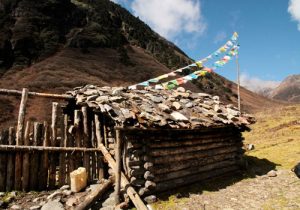 In Tibetan Buddhism there is the belief that in the Himalayas there are a number of hidden, mystical and outstandingly beautiful places, so called Beyuls. Sacred places, which can only be reached through hardship and where life is said to remain even if the rest of the world would collapse. It is a nice thought that in the Himalayas of Myanmar such a hidden valley exists, adding another piece to the jigsaw puzzle of the many faces of Myanmar.

Acknowlegement: Myanmar City Star thanks Christian Hainzl for kindly permitted to post the above blog which is the extended article “The Little Tibet in Myanmar” published in the Myanmar Times, 26 February 2016.