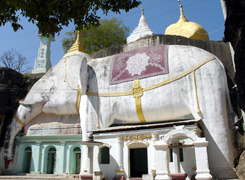 Day-2:
Monywa – Powin Taung – Shwe Ba Taung – Mandalay
Cross Chindwin River on a boat. A few hour car journey to Po Win Taung. Proceed to nearby Shwe Ba Taung. Return to Mandalay. Drop off at the hotel in Mandalay or airport/ rail station/ bus station for your onward journey. End of our service.

Thanboddhay Pagoda (also known as Mohnyin Thanboddhay Pagoda) is the most unusual Buddha temple complex in Myanmar. The temple has a unique shape in the whole of Myanmar, resembling Boroburdur in Indonesia. The entrance is guarded by a par of magnificent white elepant statues, again different from other temples in Myanmar which are guarded by Chinthes (Lions). The wall and archway are decorated with more than 580,000 Buddha images. It dates from 1303, but was reconstructed in 1939 and the completed in 1952. It is a brain child of the famous Mohnyin Sayadaw whoes life-like effigy can be seen nearby. It is a well maintained modern worship place with some modern Buddhist arts.

Shwe Ba Taung complex is just beyond the Pho Win Tauung within a short walking distance. Monasteries and temples are carved out of the narrow volcanic rocky cliffs, probably enlarged and the entrances cut or neatened and filled with Buddha images. Natural gorges have been widened and sand stone stairs built for pilgrims to walk between caves. Mural painting dates 13th century could be seen in inner walls of some caves.

An additional structures were built in colonial era, such as the brick entrances with archways built across the pillars complete with Corinthian capitals. The archways are also elegantly decorated with a fusion of European and Myanmar motifs, unicorns and the Chinthés (a celestial lions of Myanmar) in pestal colours, and the designs complement each other.

Twin Taung is located north of Monywa. It is about 2hour drive from Monwya and off the Monywa – Kalaywa Highway. The main attraction of Twin Taung is the extinct volcano with a crater lake where a very rare Spirulina is found. Spirulina is used in cosmetic, dietary supplement and medicinal products. After a climb to the top of the volcano visitors will have great views of the natural surroundings. The state run factory at the base of the hill on the lake shore is one of the 4 locations where Spirulina is produced. Twin Po (the local name for the edible insect of Twin Taung) is another famous produce and delicacy of the area. Almost 75% of the local villagers catch Twin Po during the monsoon season, which are sold throughout the country.
The scenery around this beautiful lake is also breathtaking and worth the visit. 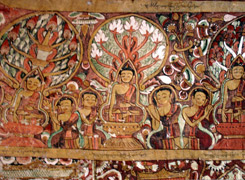 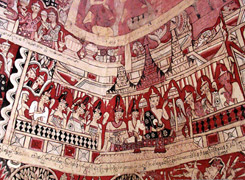 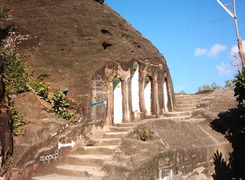 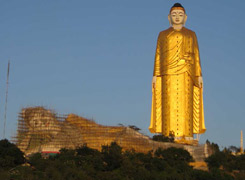 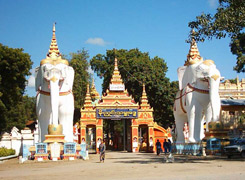 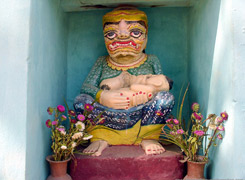 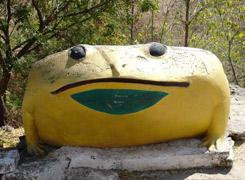