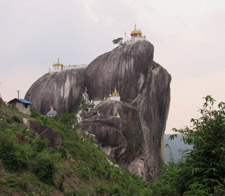 Day:1
Mandalay to Katha
Our tour leader will meet you at your self-arranged hotel in Mandalay, transfer to Rail Station in Myanmar for an overnight train to Katha. Trains in Myanmar are pretty basic, but it is one of the best ways to see the local way of life and some spectacular sceneries of the rural area which couldn’t be available from the normal tourist route. Overnight on the train.
Day:2
Katha to Banmauk
Early morning arrival in Katha. Morning tour in Katha to see some of the sites in George Orwell’s book, Burmese Days including British Club, Tennis Club and District Commissioner’s House. A visit to the Natpauk Elephant camp could be arranged if it is of your interest. Afternoon transfer to Banmauk. If time allows, drop by at Thatkyakyin (a Gardu tribal village and Manlel Monastery) and Letpankhone Villages to see a Shan Drum making workshop. Overnight in Banmauk, a very small town.
Day:3
Banmauk
Today, we will have an early start and trek through the jungle (about 3.5hours) and climb up the narrow stairs between giant rocks to get to the Monastery on the rock on the summit. Enjoy the spectacular view from the monastery and observe the way of life at the monastery. Our guide can help you to communicate with the monks if you have any questions or if you just want to have a chat with them. Back to Banmauk.
Day:4
Banmauk to Indawgyi Lake Wildlife Sanctuary
We will have an early start. Leave Banmauk to Lonton Village in Indawgyi Lake Wildlife Sanctuary. We will stop at Hopin on the way. Evening at leisure and overnight at Lonton Village in Indawgyi Lake Wildlife Sanctuary.
Day:5
Indawgyi Lake Wildlife Sanctuary
Day tour around Indawgyi Lake Wildlife Sanctuary. Trek to a mountain near Lonton Village for a beautiful panoramic view of the lake and the boat tour around the lake. Visit a few local villages nearby. Evening at leisure, overnight in Indawgyi Lake.
Day:6
Indawgyi Lake Wildlife Sanctuary – Hopin – Mandalay
Morning at leisure. Indawgyi Lake claims to offer the most varied outdoor activities of any destination in Myanmar such as cycling, kayaking, wild swimming, bird Watching, trekking, motorbike tours and boat tours around the lake and villages. Our guide will help arrange your morning activities. Transfer to Hopin Rail Station for the overnight train to Mandalay. Overnight on the train.
Alternatively, you can travel on your separate way to Myitkyinar on the train or car from Hopin and terminate your tour with us here. There are daily trains from Myitkyinar to Mandalay and also flights from Myitkyinar to Mandalay and Yangon on Tuesdays, Fridays and Sundays.
Day:7
Mandalay
Arrival in Mandalay. Transfer to your self-arranged hotel in Mandalay City or our guide can help you with the onward journey if you are traveling to the airport, highway bus station or the jetty. We advised you let us know at the time of the booking so that our guide can plan it ahead for you. End of our service.

Katha is a small riverside town. It was the model for Kyawktada in George Orwell’s novel “Burmese Days”. Although Orwell modified the plan of the town a little, it’s possible to seek out several of the colonial buildings that played a part either in the novel or in Orwell’s life in the town such as British-era jail which is still in use, British Club, Tennis Club and District Commissioner’s House.
Between Katha and Banmauk are Thatkalkyin Village where Gadu tribe (a sub tribe of the Kachin ethnic group) lives and Lapahnkhone Vilalge if traditional Shan Drum (long drum) making is of your interests. Manlel Monastery (near Thatkalkyin) to see embalmed death body of Manlel Sayadaw. There has also been news that an underground hospital near Katha used by Japanese Army during the WWII but the entrances were closed before their departure is to be recovered.

Bamauk is a small town approximately 1.5 hour drive from Katha. It is famous for the Banmauk Monastery on the spectacular rock in Zalong Taung (Zalong Hill). Travellers required a special permission and accompanying guide to visit the area. One of the main activities local people do for living is foraging and selling mushrooms. There is an option to trek through teak jungle to get to the monastery or to get there via motorised vehicles outside the raining season. If allowed by current local regulations, Banmauk monastery can accommodate overnight guests at a common area in the building. Guests needs to bring their own sleeping bags and mosquito nets.

Inndawgyi Lake (546 feet/ 166 m above the sea level), located in northern Myanmar is the biggest inland lake in Southeast Asia and the largest in Myanmar. It measures 13 kilometres (8.1 mi) east to west, and 24 kilometres (15 mi) north to south. There are more than 20 villages dotted in the surroundings of the lake and the predominant ethnic groups living there are the Shan (Tai) and Kachin (Jingphaw). Lake side villages include Lonton, Nyaungbin, Lwemun, Hepu, Hepa, Nammilaung (Cane Buddha Image, old teak monastery, interesting architecture with high wooden fences around all houses), Shwe Taung (for a scenic view of the lake, need to take either boat or motorbike), Ask InnChitThu for recommendation. One of the main attraction is the floating Shwe Myitzu Pagoda.
Indawgyi Lake is the main part of the Inndawgyi Wildlife Sanctuary, which was established in 1999 by the Ministry of Ecotourism. The sanctuary, which encompasses 780 square kilometer (300 square miles), contains a variety of animal species, including rare mammals and birds. Leopard, golden cat, the Malaya sun bear, gaur, banteng or wild cow, serow, goral, sport-billed pelican, vulture, other water birds, 120 species of forest birds Myanmar peacock and Soft-shell turtle are present. It is also one of Myanmar’s important bird area and 10 endangered species can be found. Of these species, Greylag Geese, Oriental Darter and Purple Swamphen are prominent during the month of January. The lake and surrounding wetlands provide an important winter feeding habitat. Every year migratory birds from as far as Siberia follow the East Asian-Australasian flyway and flock to Indawgyi Lake to rest and feed during the winter season. A tour of the lake by motor canoe allows the viewing of a large array of wetland species.
Reaching to Indawgyi Lake is not easy. From Myitkyina it’s almost a five-hour train ride to Hopin, followed by a two hour taxi trip, or a three- to six-hour shared pick-up truck ride, along a very bumpy road to Lonton village on the lake. For that reason, this is a place that has never seen many tourists.

Inndawgyi Lake claims to offer the most varied outdoor activities of any destination in Myanmar, such as cycling, kayaking, wild swimming, bird Watching, trekking, motorbike tours and boat tours around the lake and villages.
Below services are provided by Inn Chit Thu (Lovers of Indawgyi) Tourism Group, a community-based organisation run as a social enterprise, with profits set to be invested in environmental conservation and community projects. You can ask for a map of the area if you are going on your own. Price are for guidance only, and subject to changes by the provider. 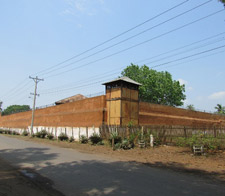 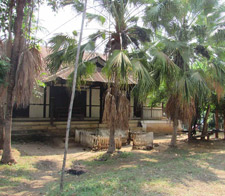 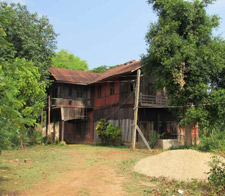 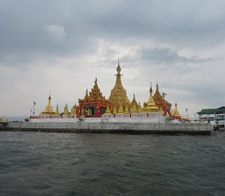 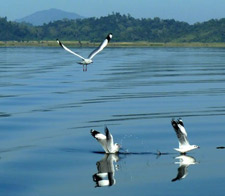 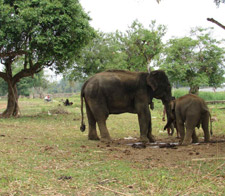 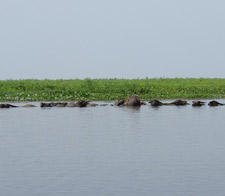