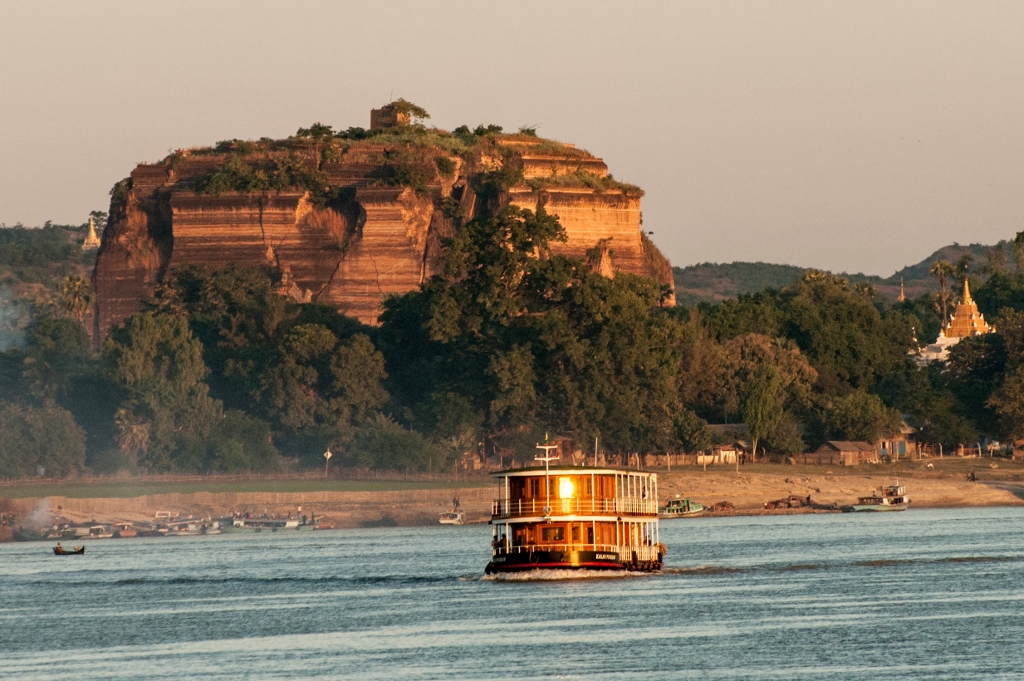 Contact us for the availabilities and latest exclusive offers.

For those without the time for a longer classic Pandaw cruise join one of our cult short cruises between the two ancient capitals of Burma. We started these in 1998 and they are a great component in a tailored land tour.

You will see the best of river life with a stop in the old colonial village of Sameikko.

Warning! Most people who book the short cruise rebook for a classic longer cruise in a future year.

Check in 1130 for a 1200 departure. Afternoon walk round the old colonial village of Sameikkon.

Arrive and disembark in Pagan Ayer Jetty by 10.00am.

Though Rangoon is the modern day capital, Mandalay, or Yadanapura — the ‘City of Gems’, remains the Golden Land’s spiritual capital. To know Mandalay and its pleasant surrounds is to know Burma. Situated in the heart of Upper Burma, the city is at the hub of river routes from China and India and land routes from the Shan massif and Siam beyond. The city throbs with life and trade. This is a city of markets and monasteries and is no touristic backwater. As well as being the economic epicentre of Upper Burma Mandalay is the religious capital of Burma There as many living monasteries and pagodas as Pagan has dead ones and the monastic population numbers over 100,000. The present city covers an area of 25 square miles and is rapidly growing.

Yet Mandalay is a relatively recent creation. One story tells that King Mindon decided to move the capital to a new site from Amarapura in 1856 because the Irrawaddy Flotilla Company steamers kept him awake at night with their whistles! The reality is that Mindon, a moderniser and reformer, was anxious to break with the past and establish a new era of peace and prosperity for Burma following the humiliation of the two British annexations. This was symbolised by the construction of a splendid new capital. The palace-city, that also housed government offices and personnel and military regiments, was vast. The original moat and walls a mile and a half on each side still stand with their splendid pyatthat spires over each gate. Within lay the ‘forbidden city’ — an elaborate system of teak pavilions, throne rooms and halls. Tragically this was destroyed by an incendiary bomb in the Second World War but it has now been meticulously reconstructed to give an impression of the awesome scale of the royal palace and its sumptuous decoration of gold leaf and lacquer.

Around the palace area the devout king lavished donation upon donation constructing splendid teak monasteries for the royal monks, rest houses for pilgrims, shrines on the Mandalay hill and most significantly the great Kuthodaw Pagoda. The Kuthodaw is rightly said to be the world’s largest book as here the king had the Buddhist scriptures inscribed on 1,774 marble slabs, each housed in its own private pavilion. These many dedications may be visited today and truly conjure an image of the strange mix between opulence and obeisance that existed in royal Burma.

The British captured Mandalay in 1885 following a campaign for control of the Irrawaddy and on 1st January 1886 the Burmese empire was formally annexed by Lord Randolph Churchill as he rose his glass at the stroke of midnight. The royal palace was renamed Fort Dufferin and a new city on a grid plan was laid out to the south-west of the palace-city extending to the river bank and its important port. This plan remains to this day though sadly many of the old colonial buildings have been lost — either in the war, fire or 1990s developers. Glimpses of the old colonial city may still be seen, particularly in the downtown area around the Mahamuni Hpaya-gyi — the city’s principal shrine.

Bagan is one of the richest archeological sites in the world and the highlight of every tour through Myanmar. In between 11th and 13th century the kings of Pagan dynasty ruled the country and ordered thousands of pagodas and temples to be built. There are about 20 temples and pagodas to be seen here with some beautiful ornamentic design.

Click Here for more images of the RV Orient Pandaw.